Pictures have emerged on social media of recruitment posters for a neo-Nazi group, which were found on the University of Pennsylvania’s campus.

The group, Atomwaffen Division, has been a rising force in extremist politics and has been targeting US University campuses. In February they plastered posters over the University of Washington’s campus, which we only became aware of when we researched the group having seen these latest pictures.

The stunt at Washington was videoed, showing several people with covered faces plastering the neo-Nazi posters over the campus at night. The group has been glorified by the Daily Stormer, the neo-Nazi news publication, for following the example of National Action, which was proscribed as a terrorist organisation following action by Campaign Against Antisemitism, in publicising their recruitment stunts on YouTube.

The recruitment posters say “how is a diploma going to help you in the race war? Join your local Nazis! The Atomwaffen Division” and features a Swastika and a pointing hand.

The group claims that it has started its recruitment in response to the growth of “communists”, Black Lives Matter, and “Jewish interests” and calls for a “National Socialist revolution”. 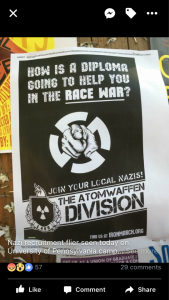