Posters from the neo-Nazi group National Socialist Legion were removed from near the campus of Duke University, North Carolina.

The posters, which were removed on Monday, included a depiction of a figure pointing a gun at an antisemitic caricature of a Jew. The caricature was superimposed on an image of an octopus wrapped around the globe, itself an antisemitic image used in Nazi propaganda. The antisemitic caricature used is referred to euphemistically as the “happy merchant”, a far right internet meme which has become a mainstay of the alt right’s antisemitism. The poster read “right of revolution. Your ancestors threw off foreign oppression, time for you as well” – a statement that, alongside the violent imagery, is clearly a veiled call to violence against Jews.

The other poster, pictured below, ranted about “greedy Jews” and “Zionist oppression”. As well as listing several Jews, singling them out above non-Jews as “greedy” – an antisemitic canard with a long history. The poster also depicted a presumably non-Jewish man begging to an image of a man in a top hat with the Star of David on it. 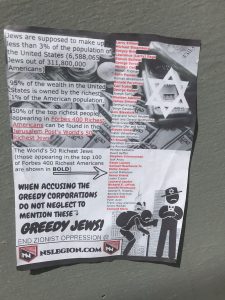 National Socialist Legion are clearly an unapologetic neo-Nazi group. They describe themselves as a “Revolutionary National Socialist organization dedicated to protecting the White European Race” who “perform both activism and readiness for the coming Racial Holy War”. The inclusion of the term “readiness” clearly suggests that they are a dangerous paramilitary group, and the violent imagery in their material should be taken extremely seriously.

It is not yet known whether any serious police investigation has been undertaken.

A local news source has reported that antisemitic and racist graffiti was found on the Duke University campus ahead of an NAACP event.

The graffiti read “Gas the Kikes”. Such a statement is not just merely antisemitic, but could easily be considered an act of incitement. Using the imagery of the Holocaust to target and incite Jews is an unambiguous call for genocide.

Alec Greenwald, who works with the Duke chapter of NAACP, told the press “as we were waiting for the other student groups to trickle in, my kids wanted to read some of the messages that were on the tunnel. As we walked through the tunnel, we arrived at 3 derogatory messages targeting various identity groups. After having a conversation with my kids about the messages, I suggested to the student groups that we focus on that portion of the wall to paint over“.

The identity of the perpetrator is currently unknown, but the police are investigating.

“The hate speech covering the graffiti wall was unfortunate, but perhaps more unfortunate was that the existence of the slurs was genuinely unsurprising to many of the students present. Racism and homophobia are not relics of an ancient and forgotten America—or Duke, for that matter—that has since been cleansed of imperfection with time. They are instead inevitable in the experience of many of the students on this campus. Extreme examples such as this only serve to remind us of the work that remains to be done in ensuring that members of our community feel safe during their earned pursuit of academic excellence.”

B’nai Shalom Day School in Greensboro, North Carolina, has closed while FBI and local police search for the sender of a letter which “expressed a clear threat to the school and its occupants.” The FBI said the letter contained “racially charged language”.