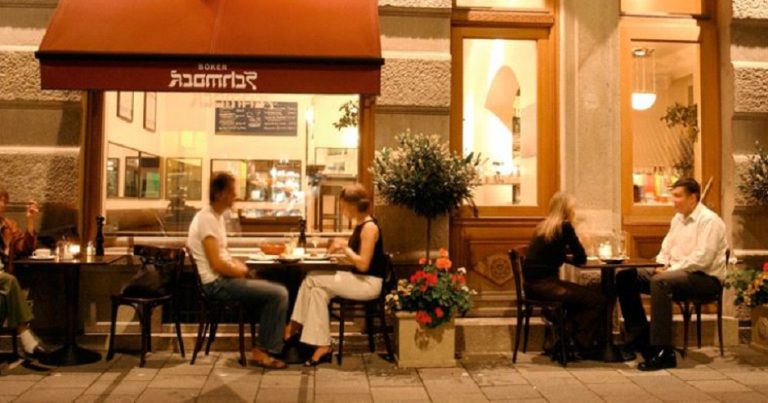 Due to the rise of antisemitism in Munich, Florian Gleibs, the Jewish owner of the Schmock Israeli restaurant, is closing his restaurant in the Bavarian capital after 16 years of operation.

Gleibs, who is 45, told the German national daily newspaper, Die Welt, that when his restaurant became a magnet for anti-Israel tirades, he hung up a large sign in Schmock’s window that said: “We are not involved in politics.”

But, despite Gleibs efforts, the personal attacks against Gleibs and his restaurant continued. In an article in the Jewish Chronicle, Gleibs stated: “I always have to get into discussions and I don’t want to do it anymore.” Gleibs said that he even received a letter where he was accused of being a “corrupt thief who hawks goods produced by terrorists on stolen land, with stolen water, and fertilized with Palestinian blood”. Such claims amount to nothing short of blood libel.

Marcus Schaefert, who is the spokesman for the Bavarian domestic intelligence agency, told Die Welt, that “anti-Zionist antisemitism pretends to criticize Israel, but, in fact, rejects Israel’s existence”.

And this anti-Israel hate, which is being driven by the German BDS campaign, has been directed at Gleibs. “People from the educated, well-off middle class have decided to hold me responsible as a representative of Israel, according to the motto: What you people are doing is no different than what we Germans did back then [in the Holocaust],” Gleibs told Die Welt.

Charlotte Knobloch, the leader of the Munich Jewish community, and a Holocaust survivor, explained to the Jerusalem Post, “The BDS campaign disguises the socially unacceptable. It has modernized the Nazi slogan, ‘Don’t buy from Jews!’ by demanding, ‘Don’t buy from the Jewish state'”.

Gleibs, who is actually an Iraqi Jew, told Die Welt that he “sees antisemitism as more emotional now than before the [2014 war].” He revealed to the Die Welt reporter that he has experienced firsthand “people on the streets screaming ‘Jew, Jew, cowardly swine come here and fight alone.'”

But German antisemitism will not force Gleibs out of the restaurant business. His popular restaurant, Meschugge, will offer patrons dishes from his now closed Schmock restaurant. However it won’t be closed for long. Schmock is being turned into an eatery that serves up cuisine from the country of Laos. Gleibs told the Jewish Chronicle that his new Laotian restaurant “will run perfectly” because the public doesn’t care about Laotian history’s darkest days. “Nobody will care about that because no Jews [were] involved.”