Katie Hopkins has built her career as a publicity-craving ‘provocateur’ but yesterday she crossed a line.

Some celebrities who thrive on outrage make genuine mistakes, but often they will deliberately wound and then apologise just to generate headlines. We cannot imagine that her latest move is a mistake.

Ms Hopkins has retweeted an American neo-Nazi called “AntiJuden” whose profile includes a swastika and the emblem of Hitler’s SS. The American neo-Nazi had cheered her support for racial profiling, tweeting: “Now that is the way it should be told”.  Even without examining its timeline, the virulently antisemitic nature of the account, which now appears to have been closed down by its owner, should have been immediately apparent to Ms Hopkins.

When the inevitable Twitter backlash arrived, Ms Hopkins could have taken the opportunity to redeem herself by issuing a full and genuine apology. Instead, she tweeted a mealy-mouthed apology which trivialised the account’s extremist antisemitic views by referring to it as merely “dodgy” and was accompanied by a photo of Ms Hopkins striking a forthright pose but with a teardrop photoshopped onto her cheek, leaving little doubt as to the insincerity of her words.

Ms Hopkins has prior form in this area. In the run-up to the last General Election, she attracted opprobrium and scorn for making a Holocaust joke about the then Labour leader, Ed Milliband, who is Jewish, and his wife Justine. 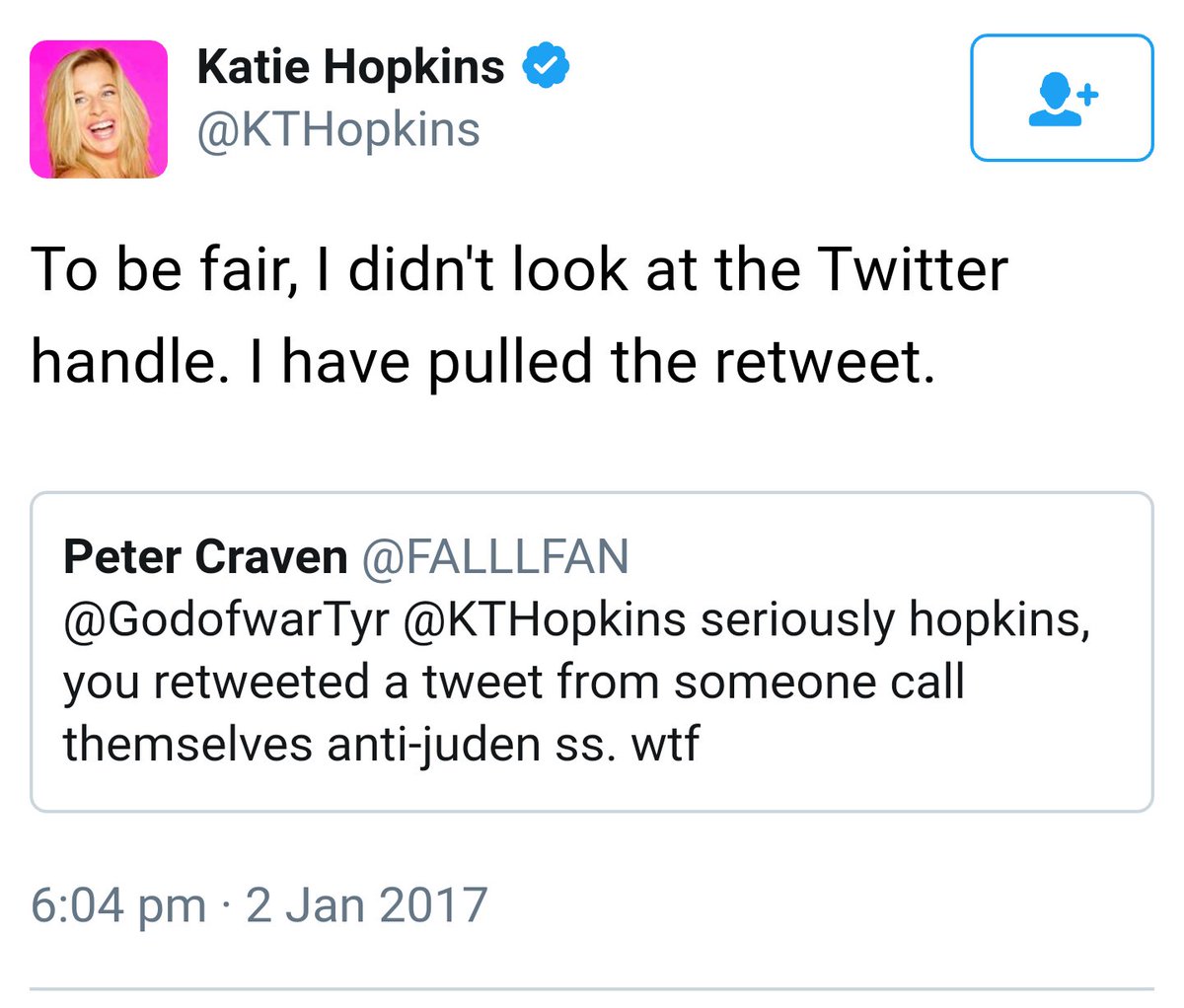 If yesterday’s episode was indeed an accident, Ms Hopkins has made herself accident prone. Having built her career on trolling the airwaves, she has developed quite a following amongst neo-Nazis like “AntiJuden”, which cannot come as any surprise to the LBC producers and Daily Mail editors who decided to give her a platform as a presenter and columnist. LBC thrives on debate, but having taken Ken Livingstone off air after his claim that Hitler supported Zionism, if they retain Katie Hopkins then their cover as a responsible broadcaster sometimes caught in the crossfire will be well and truly blown. The Daily Mail likewise.

LBC and the Daily Mail may decide to fire Katie Hopkins, and we would applaud them if they do. If they decided to reprimand her instead, she should, at the very least, be required to visit a Nazi concentration camp and for once make a positive contribution to a debate, perhaps by presenting a show and devoting a column to explaining how irresponsible demagogues are fueling the resurgence of Nazi propaganda online.